The evolution of storage is rich and extensive, and our blog is not intended to bore you. In the following paragraphs, we will briefly take you through the most notable milestones in the history of storage of data. Hopefully, we don't skip the device you first used!

Punch cards predate electrical computers. They were first used in 1725 in the textile industry to control mechanized textile looms, but then Herman Hollerith used them in the 1890s for the census calculation of the rapidly growing US population. A punch card was a thick sheet of paper with holes punched through it in patterns that could then be interpreted. Later they were incorporated as an input device to computer systems and were around as late as the mid-1970s. 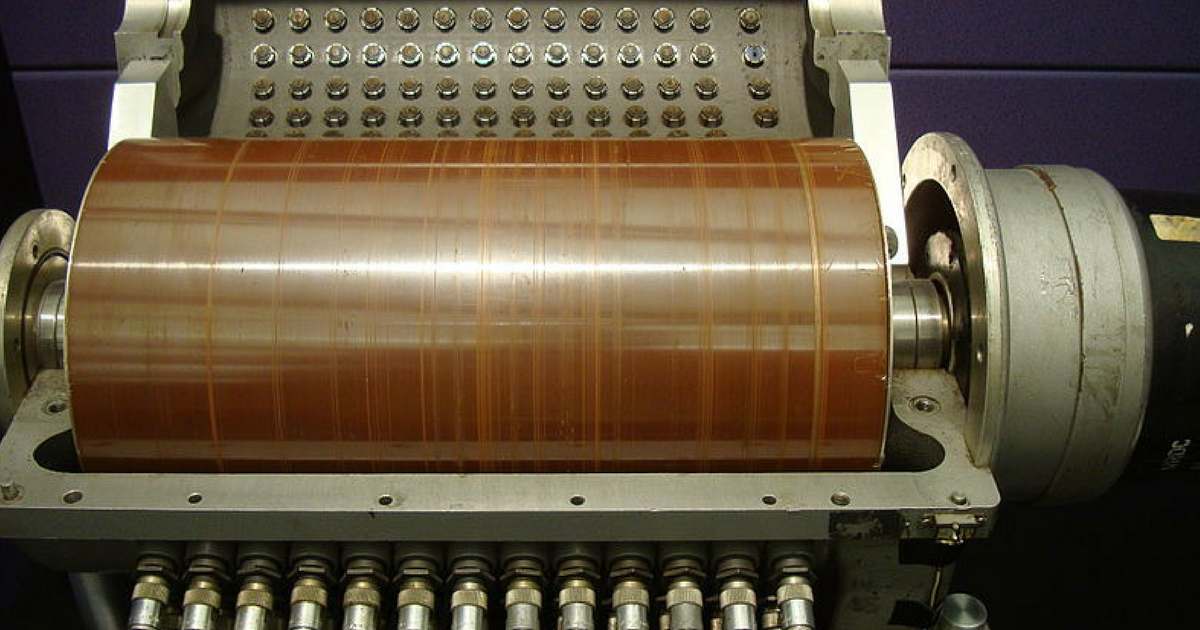 Even though it was invented in the 1930' in Austria by Gustav Tauschek, it was still widely used in the 1950s and 1960s as the main working memory of computers. In fact, that was so common that it helped coin the nickname for computers of the time – drum machines. In the 1950s it's capacity was about 10kB.

Following the tradition of punch cards, paper tape consisted of a long strip of paper where holes were punched at various locations to represent the data. It was still used in the 1960s as the main input for the DEC computers.

After the paper came magnetic tape, which worked in the same manner but was able to store more information. It was stored in a roll and read/written to by a read/write head. This is one of the oldest technologies for electronic data storage. Believe it or not, a magnetic tape is still used around the world today for storing media! It's great for archiving because of its high capacity, low cost, and long durability.

Check out our video on the history of memory and storage - here.

The first compact audio cassette was introduced by Philips. They originally intended to use it for dictation machines, but it unexpectedly became popular for distributing music. The invention of Sony's Walkman in 1979 helped popularize it even further.

The compact cassette was also a popular way of data storage for personal computers in the late 70s and 80s. Typical data rates for it were 2,000 bit/s. You could fit about 660 kB per side on a 90-minute tape.

The invention of the floppy disk started in IBM as an alternative to buying hard drives, which was very expensive at the time. The result was the first, 8-inch floppy disk in 1971. It had a capacity of 79,7 kB and was read-only. The rewritable version followed a year later.

This portable storage device made of magnetic film encased in plastic, made storing data it easier and faster. It was commonly used way into the 1990s and later came in 5,25 and 3,5-inch formats.

The history of the compact disc goes back into 1960 when James T. Russel thought of using light to record and replay music. He invented the optical digital television recording and playback television in 1970. The invention was a flop until representatives visited Russel at his lab in 1975. They paid him to develop the compact disc (CD). In 1982 the first commercial CD was produced - it was a recording from 1979 of Claudio Arrau performing Chopin waltzes.

The CD-ROM, also known as the Compact Disk Read-Only Memory, used the same physical format as the audio compact disks to store digital data. It encodes tiny pits of digital data into the lower surface of the plastic disc, which allows for larger amounts of data to be stored. In 1990 the first recordable CDs were introduced.

DVD or Digital Video Disc was the next generation of digital disc storage. It was a bigger and faster alternative to the compact disc and served to store multimedia data. It was developed by Panasonic, Philips, Sony, and Toshiba after a so-called format war. The first DVDs were available in Japan.

The companies SanDisk, Matsushita, and Toshiba came to an agreement to develop and market the Secure Digital (SD) Memory Card, a card deriving from the MultiMediaCard (MMC). It was developed to compete with the Memory Stick, a product released by Sony the year before. In 2003 and 2005 miniSD and microSD card were launched.

If you want to read more on history and evolution of flash memory cards check out our blogpost.

Cloud computing is believed to have been invented by Joseph Carl Robnett Licklider in the 1960s with his work on ARPANET, but first commercial products in this arena had to wait until much later.

In 1983, CompuServe offered its users a small amount of disk space for uploading and storing files. In 1994, AT&T launched PersonaLink Services, an online platform for personal and business communication and entrepreneurship. The storage was all web-based, and described in their adverts as, "you can think of our electronic meeting place as the cloud."

Faster internet connections and the falling cost of storage capacity means it often makes more sense for business and individuals to upload their data storage to the cloud, rather than buying, maintaining and replacing their own hardware. Cloud storage offers almost infinite scalability, with data available from anywhere and at any time.

Koofr application, launched in 2013, enables users to store private and business data on secure European servers. It's accessible from anywhere, anytime and from any device, as it is also available as an app for smartphones and tablets.

You can easily store and share documents, pictures, music, video or anything else digital. The application has many useful features, such as syncing, quick sharing and connecting your existing cloud storages into your Koofr account. It offers affordable plans of different sizes as well as software solutions for domestic and foreign Internet providers. To try it out, sign up for a FREE account!

Check out the second part of our video on history of memory and storage here.